FGM-A - Field Goals Made and Attempted

3PM-A - Three Pointers Made and Attempted

3P-R - Percentage of Attempts that are Three-Pointers

2PM-A - Two Pointers Made and Attempted

2P-R - Percentage of Attempts that are Two-Pointers

FTM-A - Free Throws Made and Attempted

PITP - Points in the Paint

The FastScout Factors are four statistics that are especially predictive of a team’s future performance. They encapsulate the skills of shooting, forcing & allowing turnovers, rebounding, and free-throw shooting.

The percentage of possessions for the team ending in a turnover.

The percentage of available offensive rebounds a team collected

The percentage of available defensive rebounds a team collected

The rate of free-throw attempts per field-goal attempts. The formula for Free-Throw Rate is FTA / FGA.

An estimate of how many wins and losses a team usually has with their point differential. The Pythagorean record is more predictive of future performance than a team’s normal record.

A team’s points scored per 100 possessions

A team’s points allowed per 100 possessions

A team’s average amount of possessions per game

A percentage that takes into account the extra value gained from 3 pointers and free throws.

A percentage that takes into account the extra value gained from a 3 pointer.

Rate of free-throw attempts as compared to field goal attempts.

The percentage of team possessions used by a specific player when they are in the game. A player "using" a possession means that a player ends a possession with either a shot attempt, free throw attempt, or turnover.

Pace is simply the amount of possessions a team uses per game. This is usually what is meant by team’s playing “fast” or “slow”. Playing fast or slow is not inherently better, it depends on the strengths and weaknesses of each team.

These ratings are better to use than Points Scored or Points Allowed because they adjust for each team’s differing pace. A team might not allow many points because they play at a slow pace, giving their opponents fewer possessions to score. In this case, Points Allowed would not accurately represent how good the team is defensively.

“Per 40” means that we adjust every player’s stats to pretend they played 40 minutes per game. For example, if a player scores 5 points and plays 10 minutes per game, their “Per 40” boxscore would show 20 points scored per 40 minutes. This is a great way to find undervalued players who might not play very many minutes.

A great feature of FastScout is being able to easily view Boxscore statistics that vary significantly from a player or team's average throughout the season. 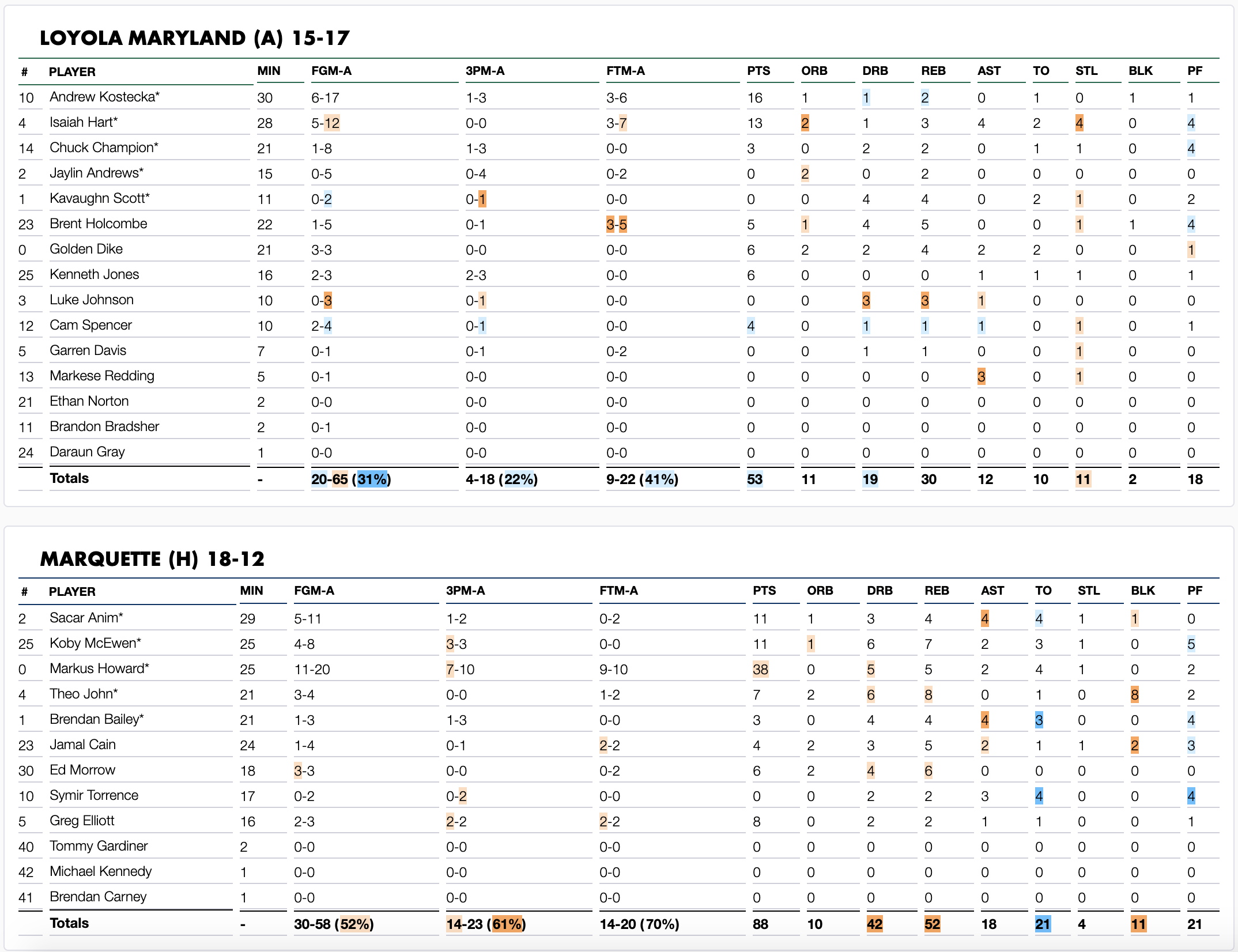 Each color shading represents standard deviations from the player's or team's average:

Hovering your mouse over any of the color-coded statistics will show you the season average that the statistic varies from: